Everyone is Awesome with the New LEGO Pride Set 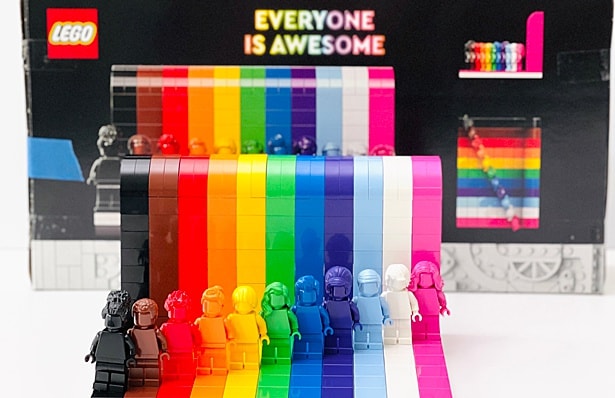 Chances are, you’ve heard the “Everything is Awesome” song from The Lego Movie. If you haven’t, now’s the time to listen to it. The creators of LEGO really hit it out of the park with their new Everyone is Awesome LEGO Pride set celebrating diversity and inclusion of the LGBTQIA+ group. In our world today, there’s so much hatred and discrimination toward different people groups. This LEGO set was intended to show the world that no matter your color, or your sexual preference, that everyone is awesome. I recently got this set for my kids and we can attest to how “awesome it is!”

GET THE EVERYONE IS AWESOME LEGO SET HERE 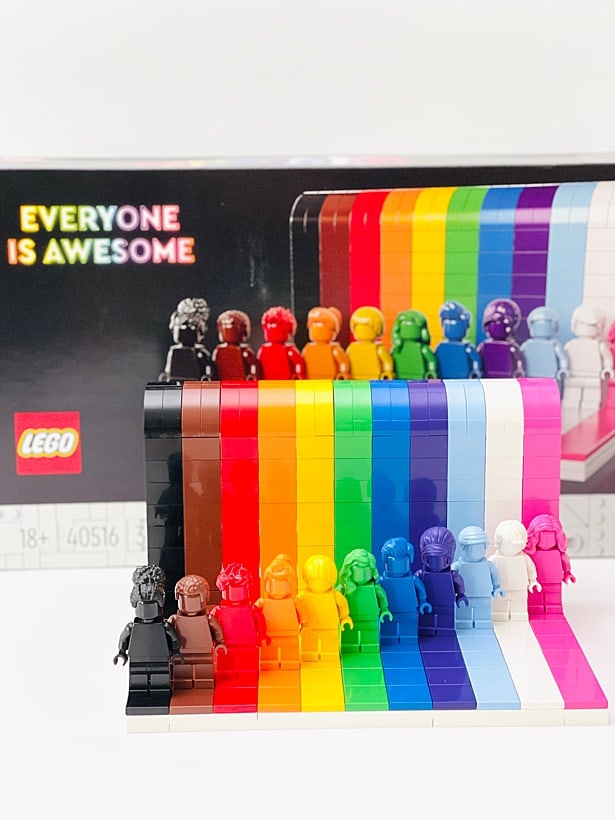 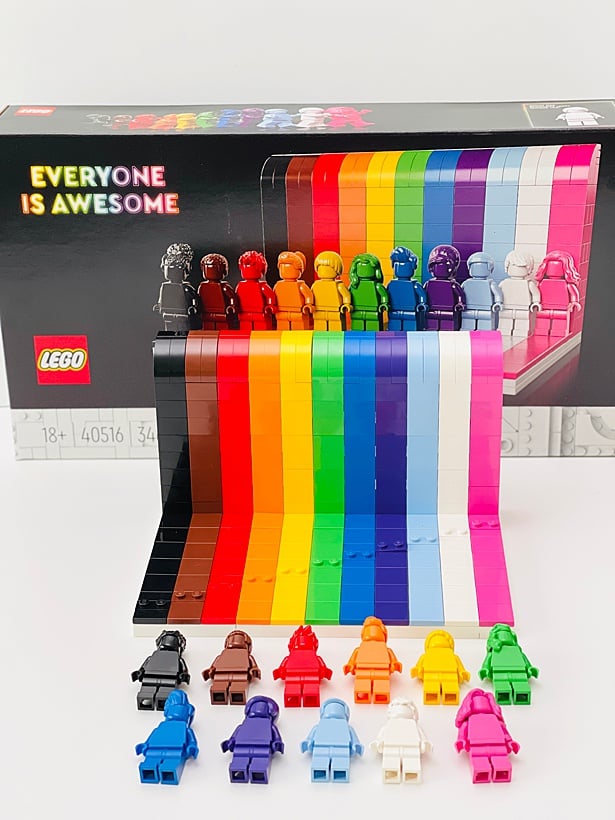 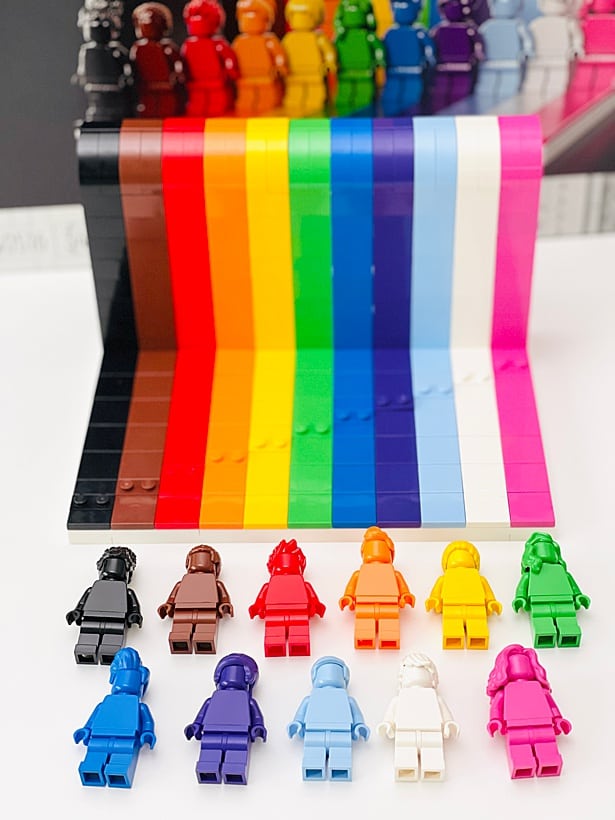 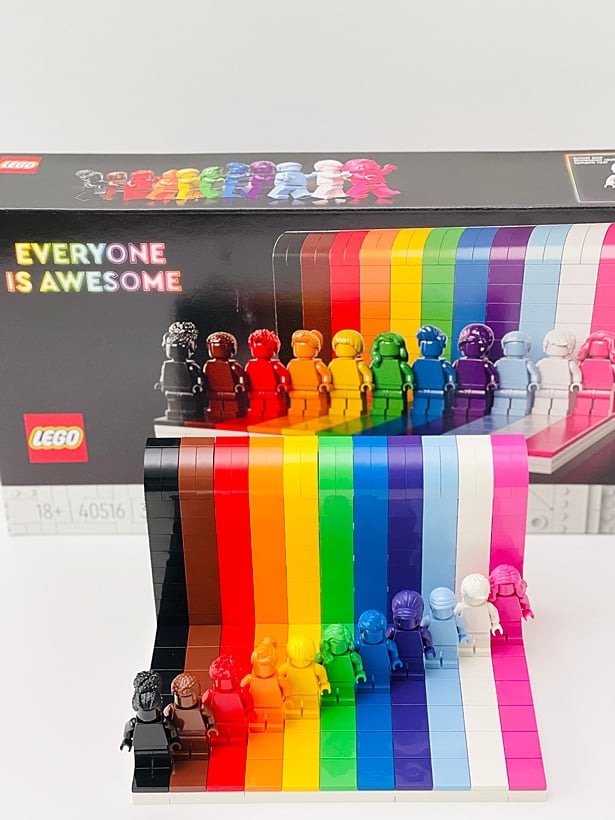 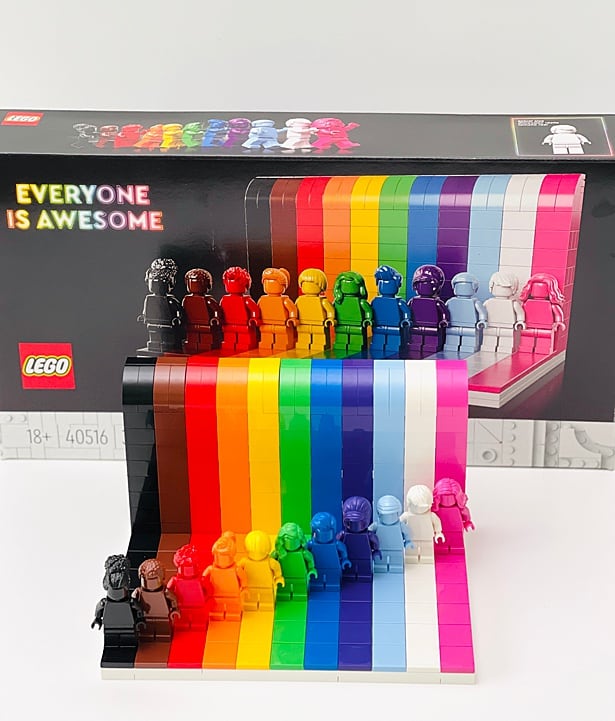 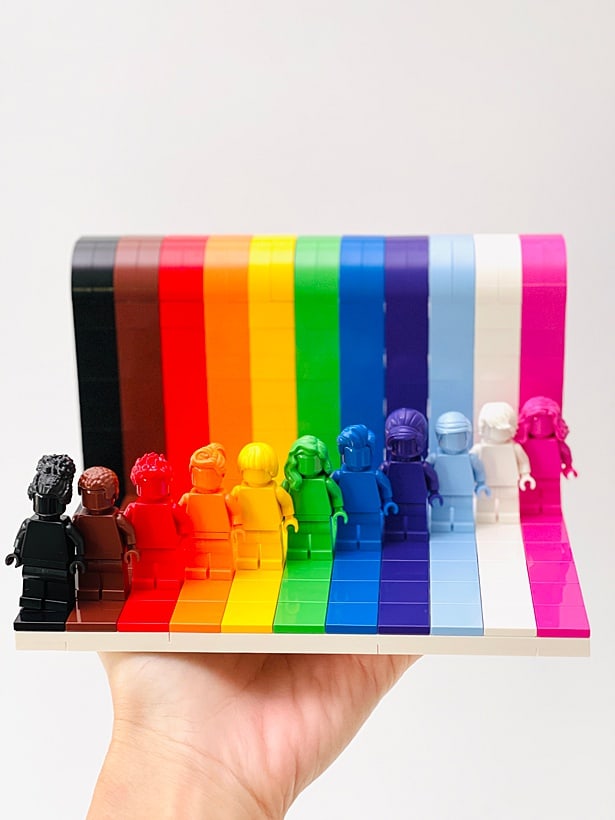 What Is The New Everyone is Awesome LEGO Diversity Set?

Matthew Ashton, the Vice President of Design at the LEGO Group stated in an interview that he designed the Everyone Is Awesome set because it represents a symbol of love and inclusivity amongst the LGBTQIA+ group. The colors of the set include the original LGBTQIA+ rainbow, pale pink, white, and blue to represent the trans community, and black and brown to represent the diverse community within the LGBTQIA+ community. However, LEGO didn’t assign specific genders to the figures in order to “express individuality, while remaining ambiguous.” According to its designer, Matthew, the set’s mission is to “show a little empathy, love, and acceptance for one another.”

Why is the LEGO Everyone is Awesome set a great toy for kids?

The Everyone is Awesome LEGO set isn’t just another “toy.” It is a symbol of love and inclusivity that you can use to help talk to your kids about treating all people with kindness and respect. The bright colors and diverse figures represent the many types of individuals and communities in the world, and how we can all come together to create something beautiful. According to LEGO, its mission is to “celebrate the power of playing together with this colorful new set.” This set is also a simple kit for kids to build! My 10-year-old was able to put it together in about 30 minutes’ time unassisted. My 3 year old loved playing with each colorful character, naming the colors and counting the figurines. 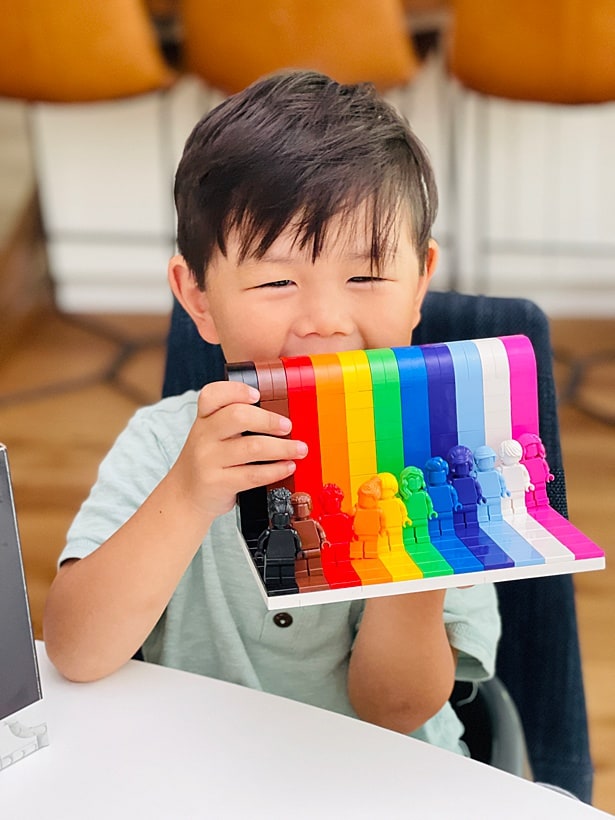 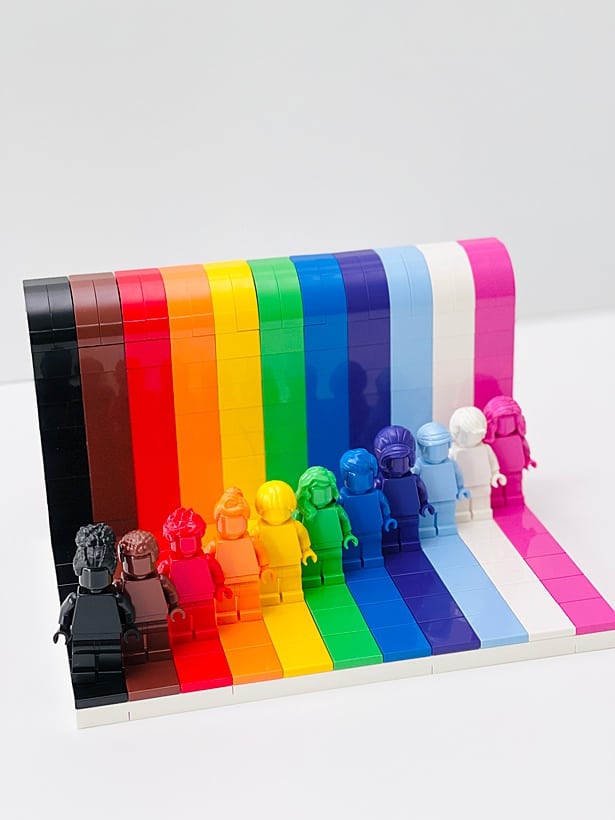 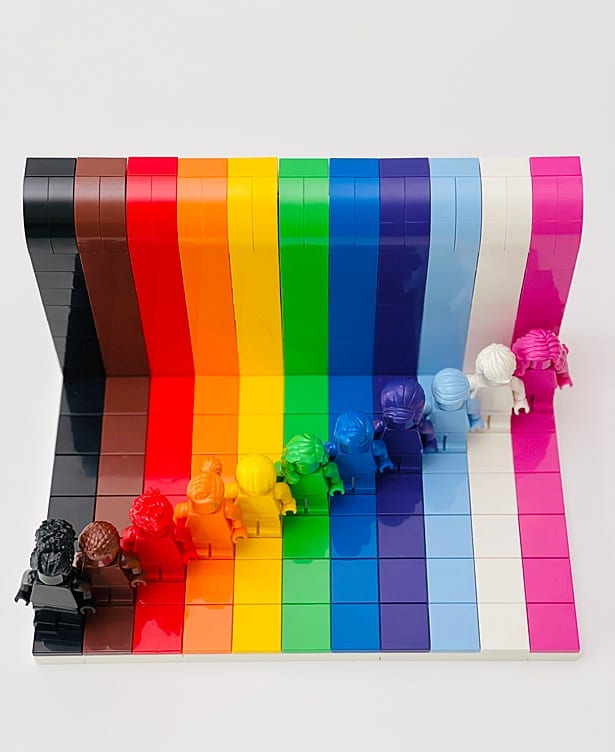 What’s inside the Everyone is Awesome Set?

The Everyone is Awsome set includes 11 mini figurines in black, brown, red, orange, green, dark blue, purple, light blue, white and pink. The base measures 8″ in height, 4″ in width and 5″ in diameter. There are 346 pieces included. Keep in mind LEGO is limiting purchases to 2 sets per household.

Watch the video in this post to see the LEGO set up close and unboxing of what comes inside.

How Is The LEGO Pride Set Being Promoted?

During Pride Month, LEGO is aggressively promoting their PRIDE products to let the world know they have an ally in LEGO, and that no community will go unnoticed. From the Diversity Set to their Natural Rainbow Flag, LEGO is setting itself up to be an all-inclusive icon in the world. They have an entire page dedicated to Everyone is Awesome, and within this page, they emphasize Employee Advocacy. According to LEGO Employee Advocacy is made up of volunteers who are passionate about diversity and inclusion and spreading it in the workplace.

Ashton states that after he came out, he wishes he would’ve had someone give him this set to remind him that he isn’t alone. Matthew states in an interview that LEGO values “fun, creativity, learning, quality, and imagination” in the workplace, and he is “proud to work at a company that wants to make a statement like this.” At first, the designer built the set for his desk, but it quickly gathered the attention of others in the office. Once they saw the creativity and inclusivity of the set, they decided it was too good not to share with the world. 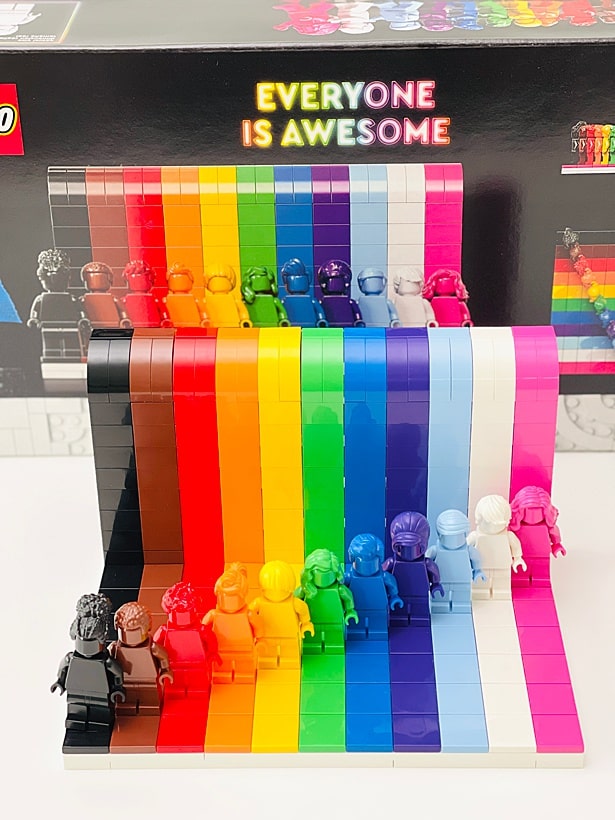 Why Did LEGO Create The LEGO Pride Set?

As a child of the LGBTQIA+ community, Matthew struggled with teasing from kids, and adults “trying to push me into being what I wasn’t.” Fortunately, when Matthew finally did come out, his parents and friends really supported him and made the whole experience much more enjoyable. Unfortunately, Matthew states that “there are still a huge amount of people that struggle in different parts of the world with either discrimination, hate, or violence.” This was one of the reasons that Matthew wanted to create this set, and create it as a brand so that everyone will feel included, even if they feel alone.

Not only is this set great for adults, but for kids as well. Matthew states in the interview that “kids are much more accepting of each other and everybody else’s differences, and I think that’s one of the things I think we can all learn from kids, is just go out there, have fun, be open to everybody, and the world would be a much happier, inclusive, loving place.” 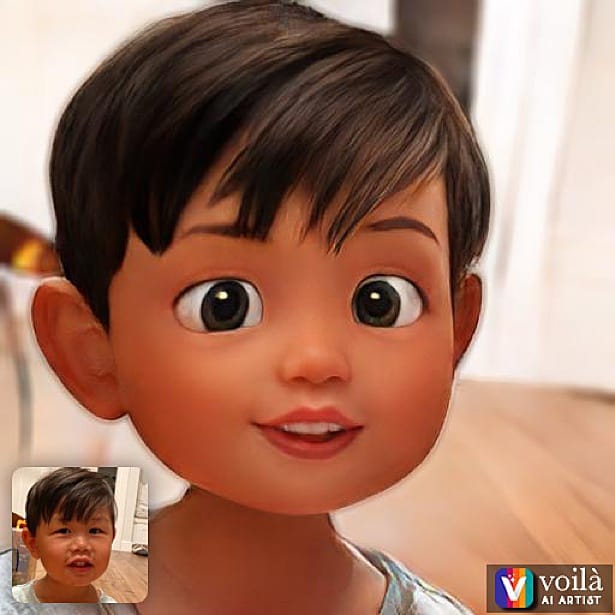 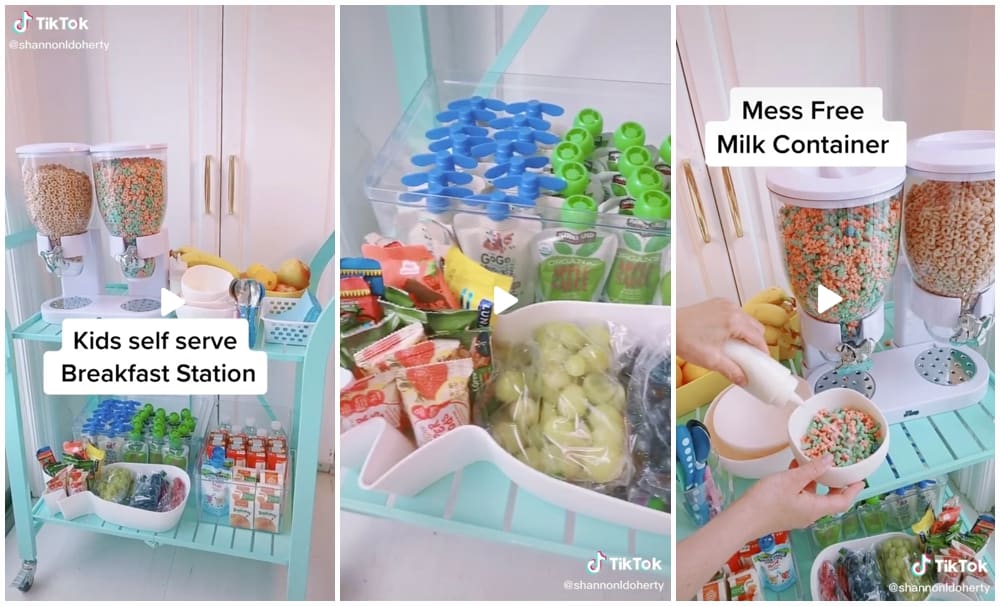