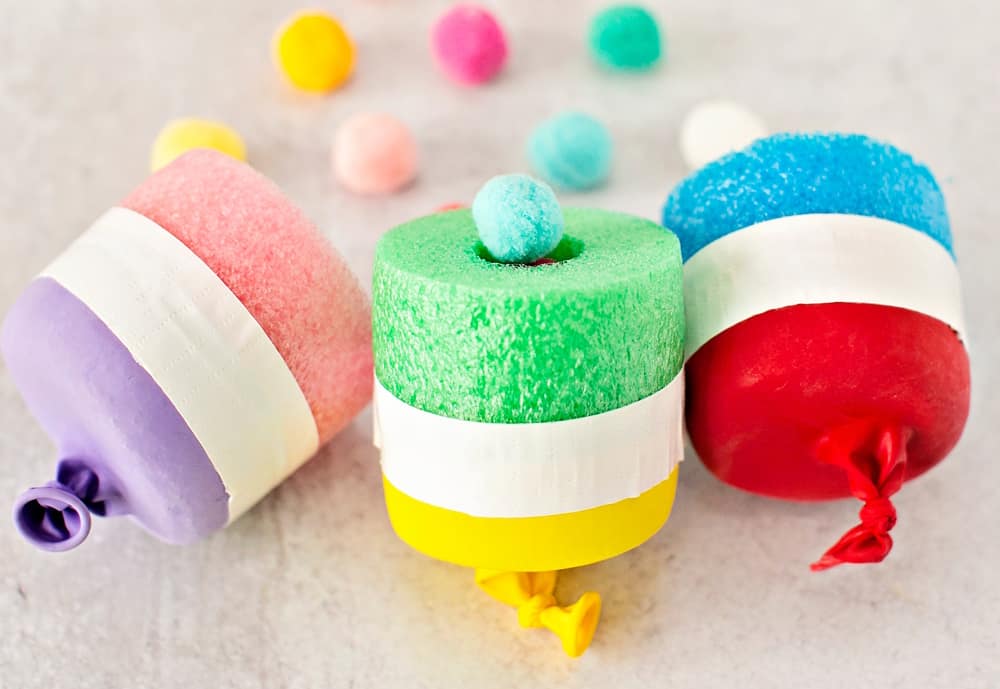 Watch the video below to see how easy and fun it is to make this Pool Noodle Pom Pom Shooter. Make sure to subscribe to our YouTube channel for more fun videos!

This pool noodle pom pom shooter is a fun STEM kids’ activity that packs loads of fun! Learn and build by making pom poms shoot out of pool noodles!

We’ve been having lots of fun building with pool noodles lately and with summer in full swing, it’s time to brush up on our STEM skills and get them making cool STEM projects that move like this awesome pool noodle pom pom shooter.

In this case, what moves are the pom poms shooting out of the pool noodles from the pull back force of the balloon around it! 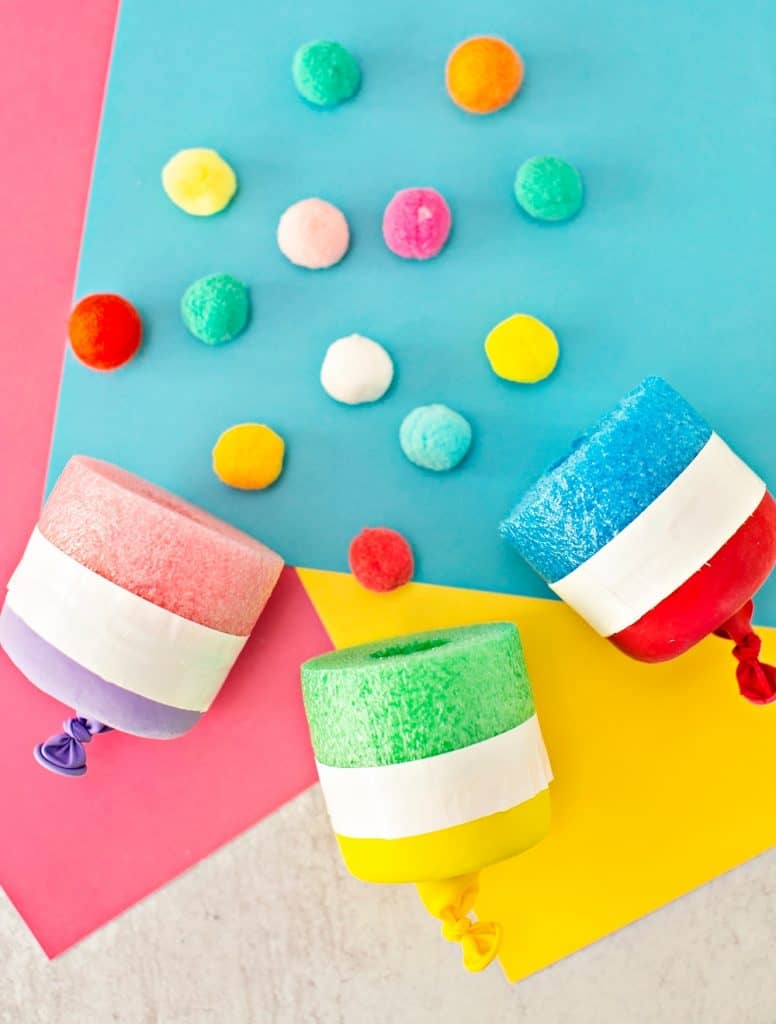 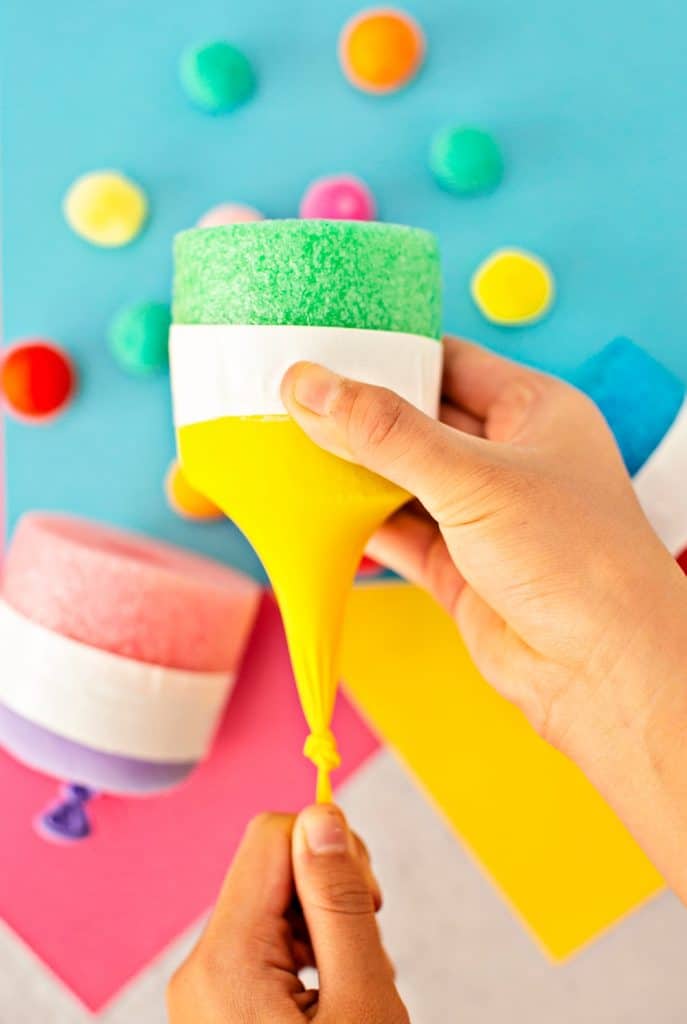 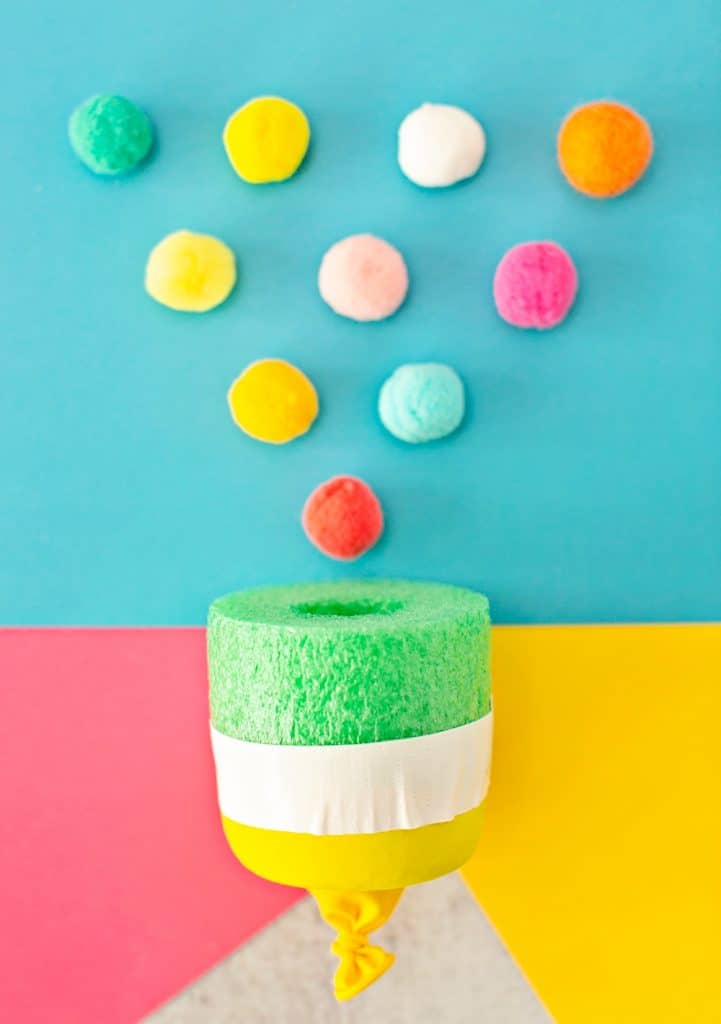 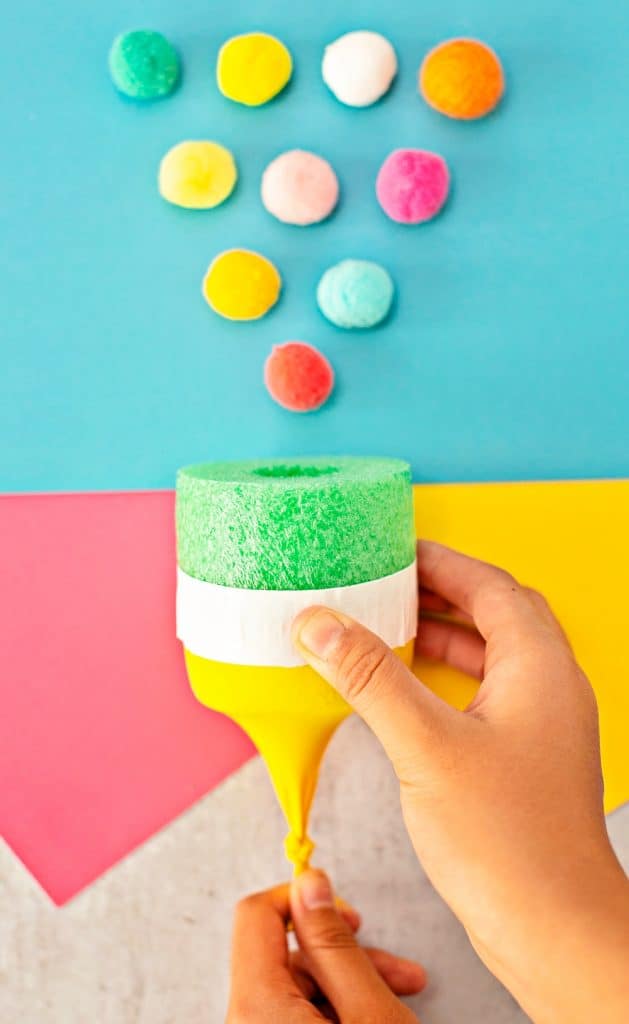 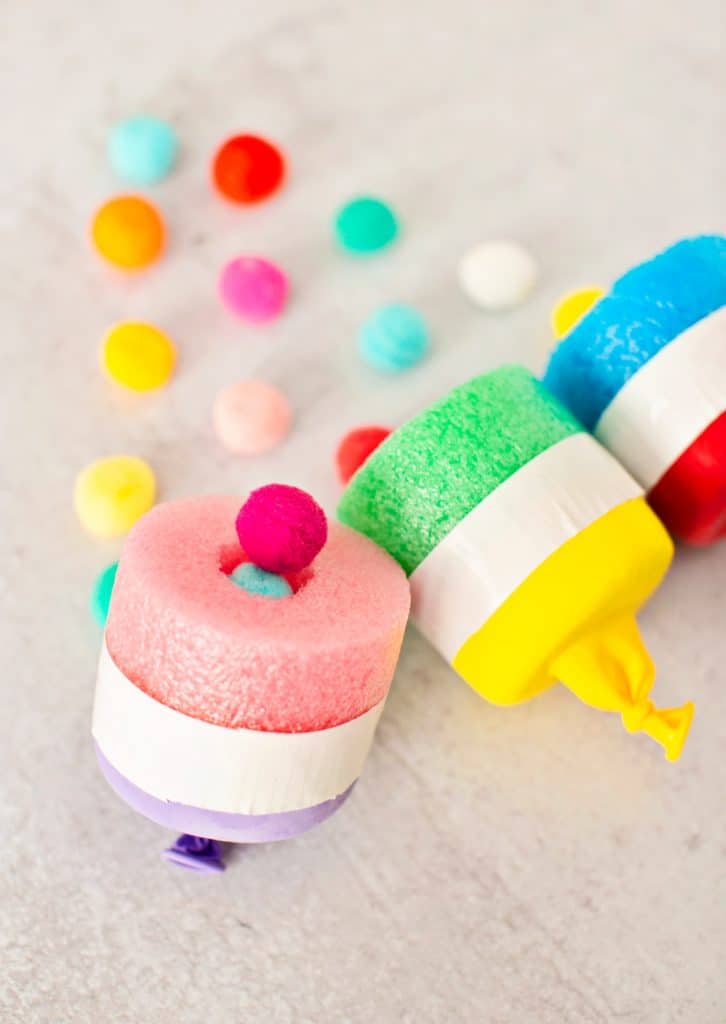 What do I need to make a pom pom shooter?

Cut some pool noodles and balloons, wrap them around and insert some pom poms inside and you have a cool game that’s ready to play!

Of course you need to be careful in who is cutting the pool noodles to size. We recommend adults do this step only. But after that it’s just a matter of cutting balloons and wrapping around the pool noodle with strong or Duct Tape. 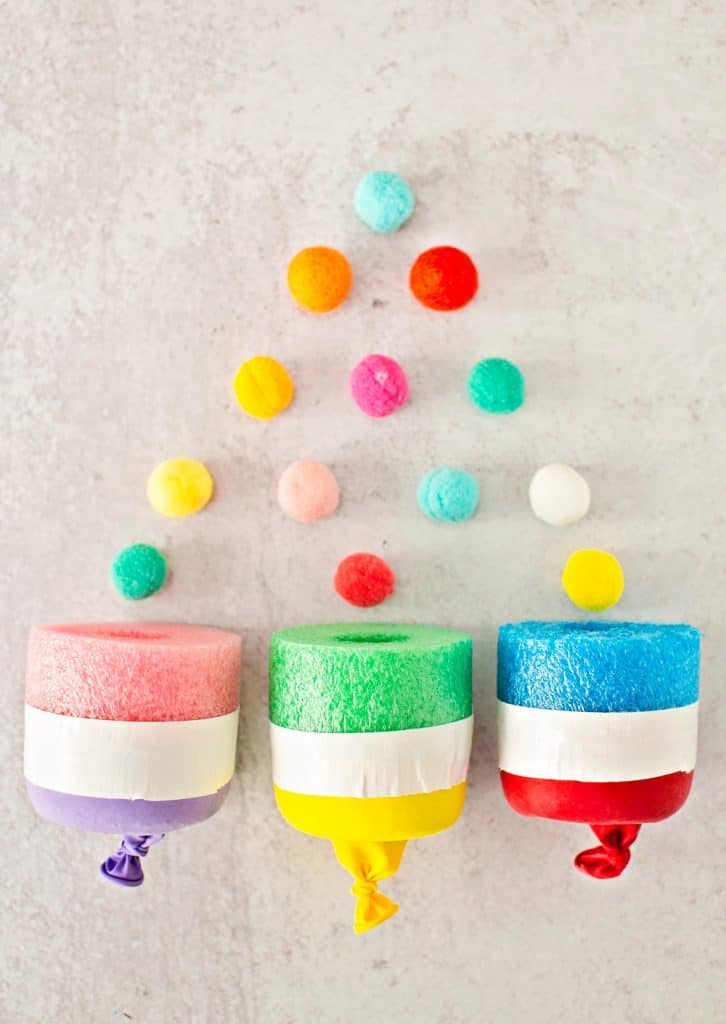 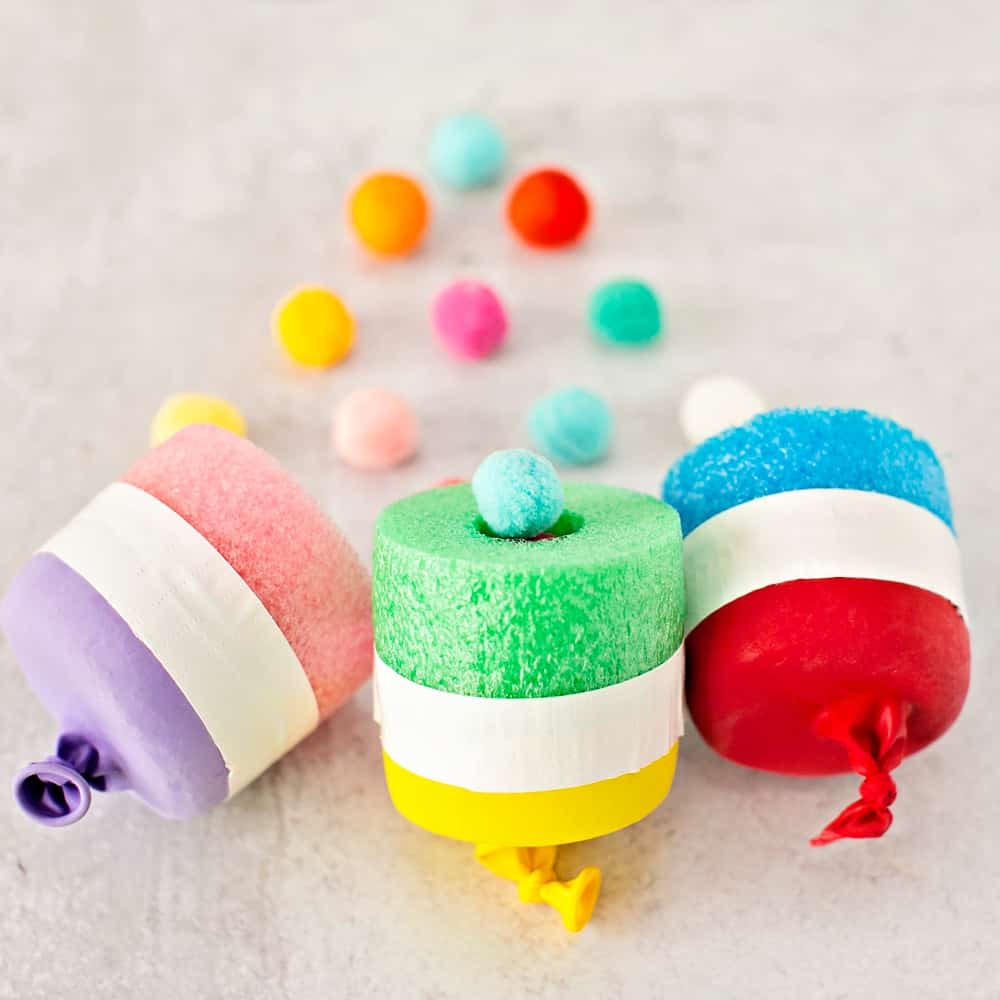 What games can I play with this fun shooter?

We always like kids activities that have multiple uses and ones that get them moving! With our kids, we played these various games with our pool noodle pom pom shooter:

These are just a few examples to play but I’m sure you and your kids can think of some more fun games!

As for toddlers, my two year old liked to just stuff pom poms inside the pool noodles similar to this pom pom whisk activity. So you can maybe make a longer shooter for your toddler and have them just focus on this fine motor skill of adding pom poms inside! 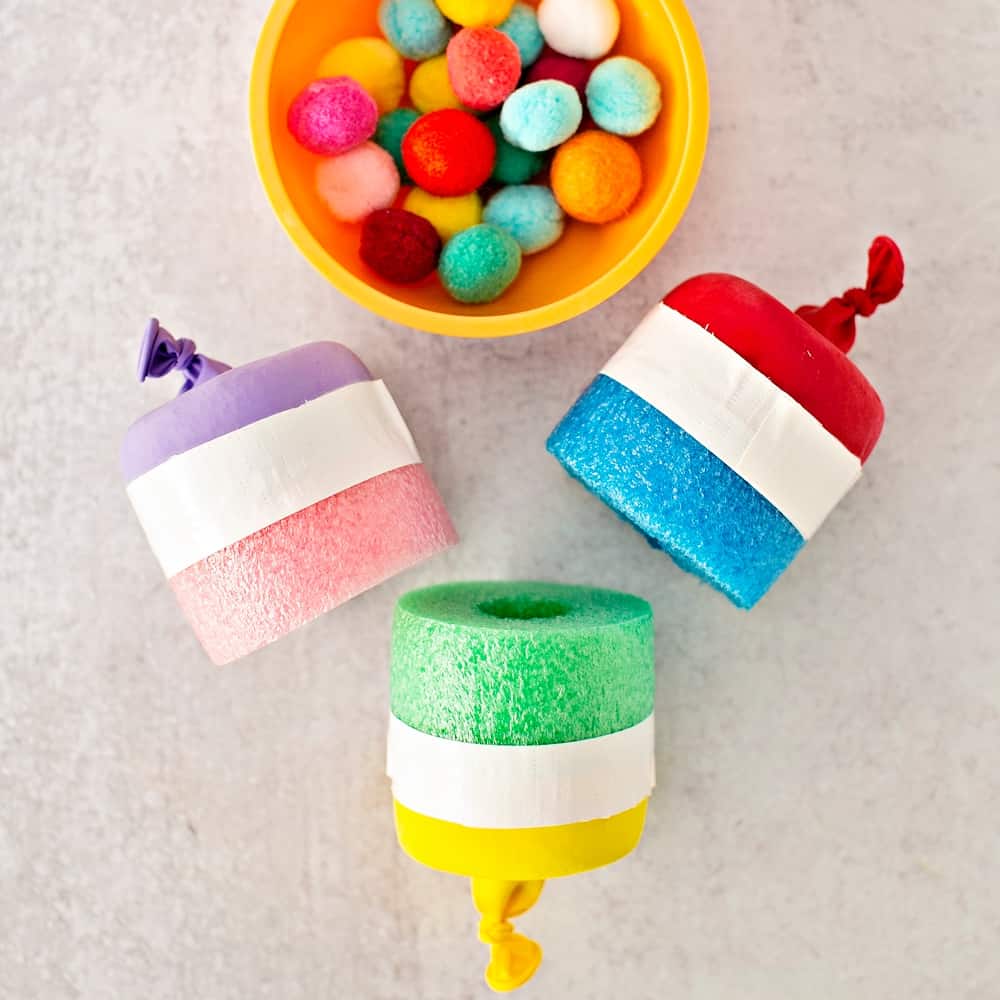 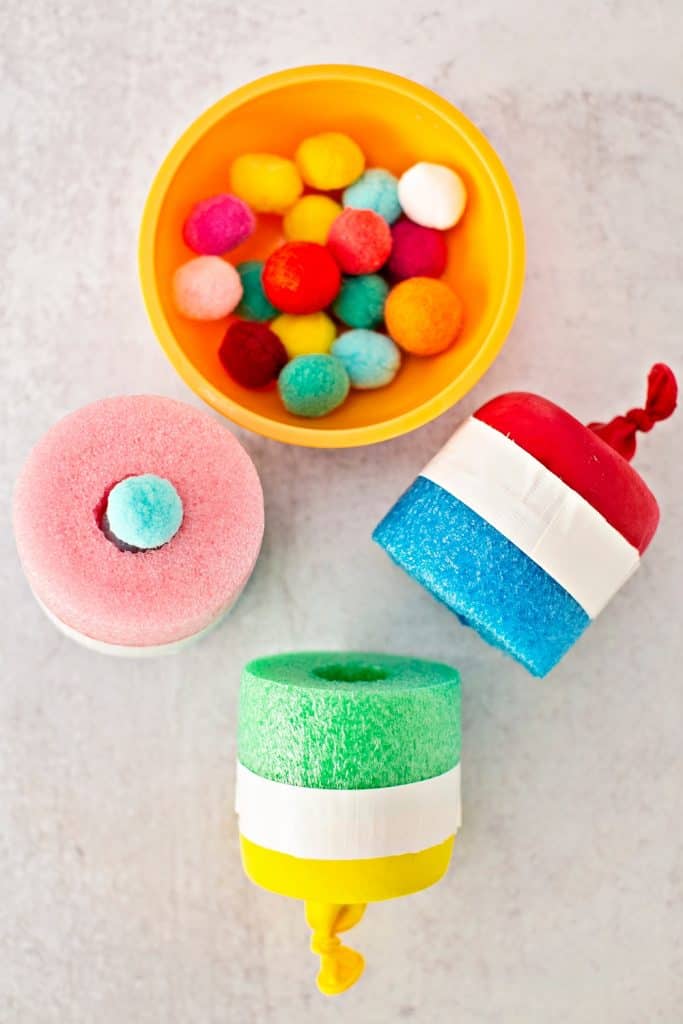 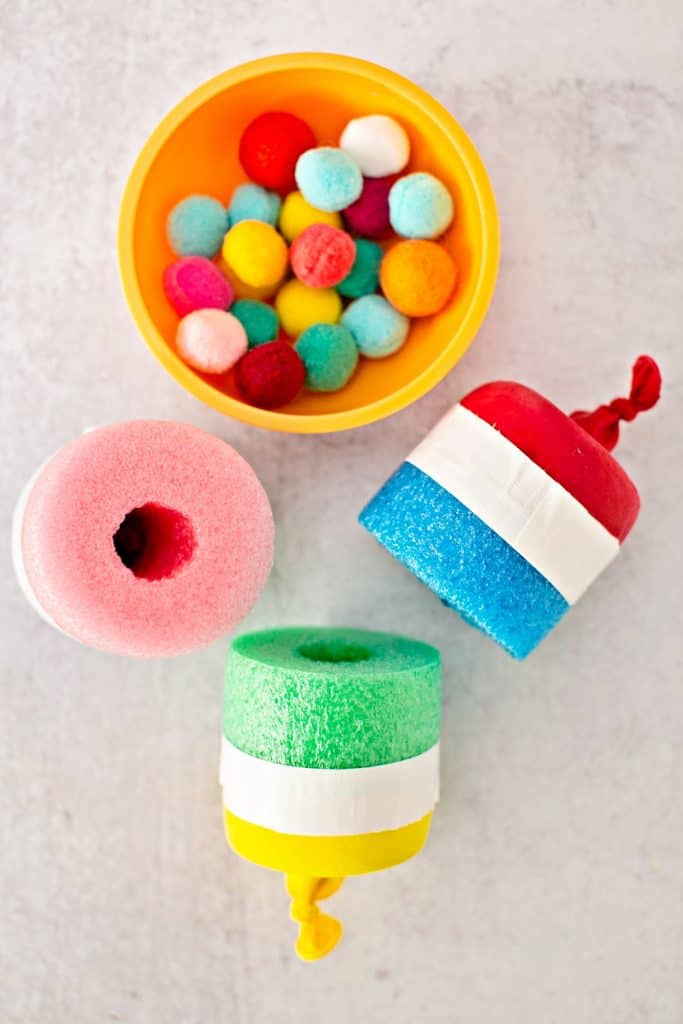 Small pom poms (About one inch. We like these stronger felt pom poms which are heavier and shot out better than puffy pom poms.) 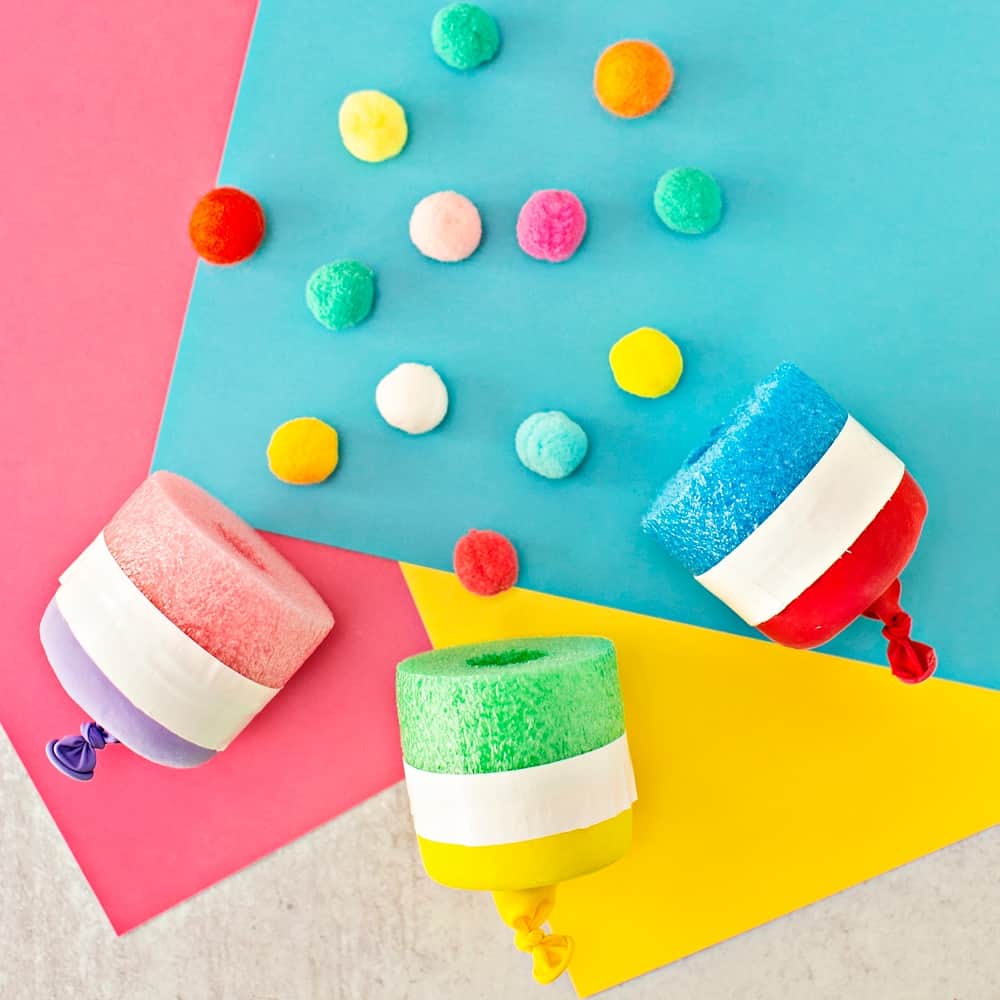 INSTRUCTIONS (watch the video in this post to see how

Step 1. Cut your pool noodles about two inches in length. (adults only)

Step 2. Make a knot on your ballon and then cut of the end.

Step 3. Wrap the larger end around one end of your pool noodle. Secure the seams of your balloon around the pool noodle with strong tape.

Step 4. On the other open end of your pool noodle add pom pom to the bottom, pull down the top of the balloon to create air and release to allow the pom pom to come out. You can do one pom pom at a time or stuff the opening. 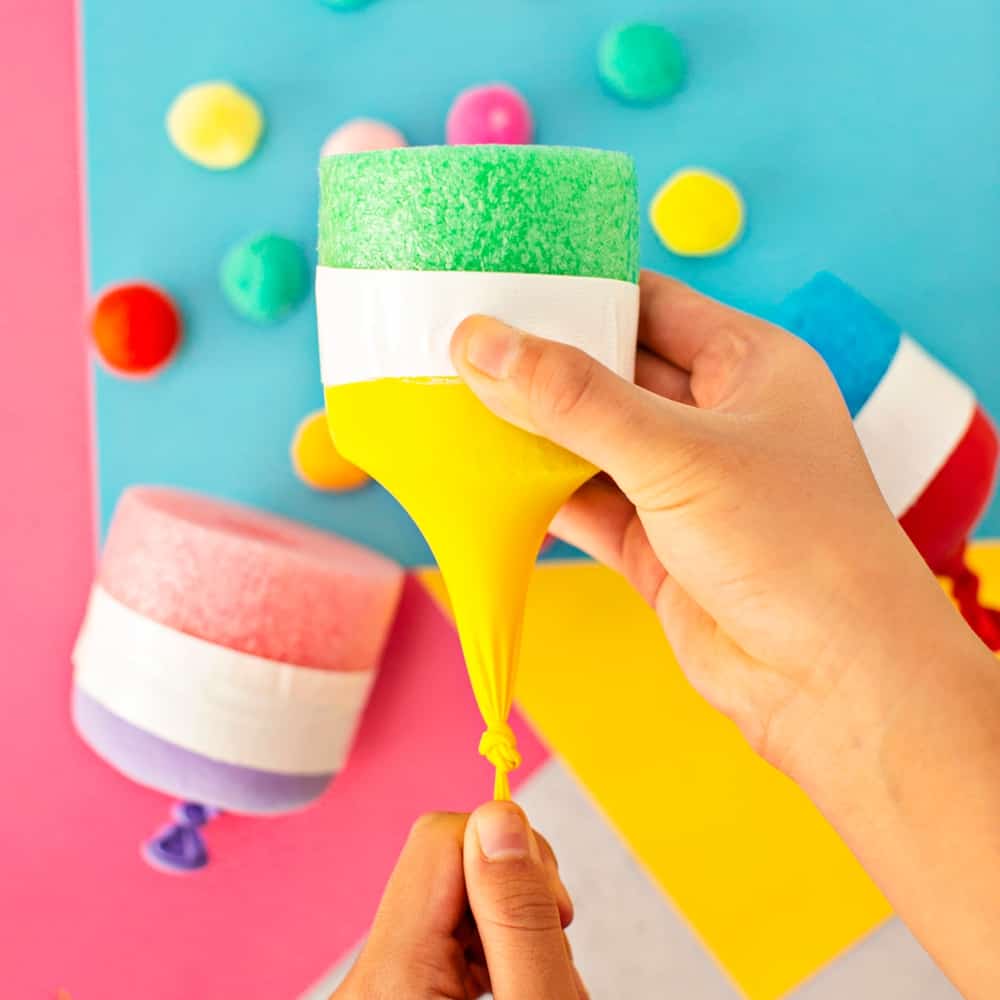 The Best Magnetic Tiles for Kids 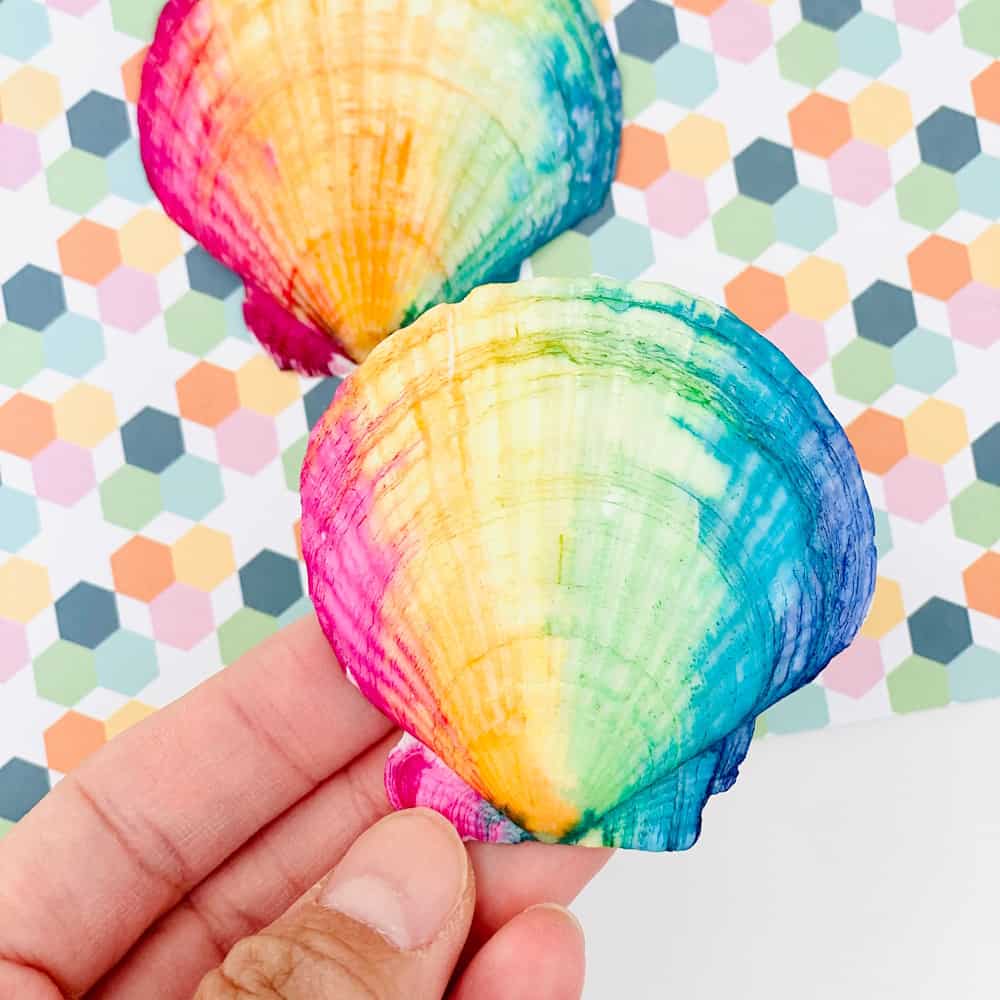 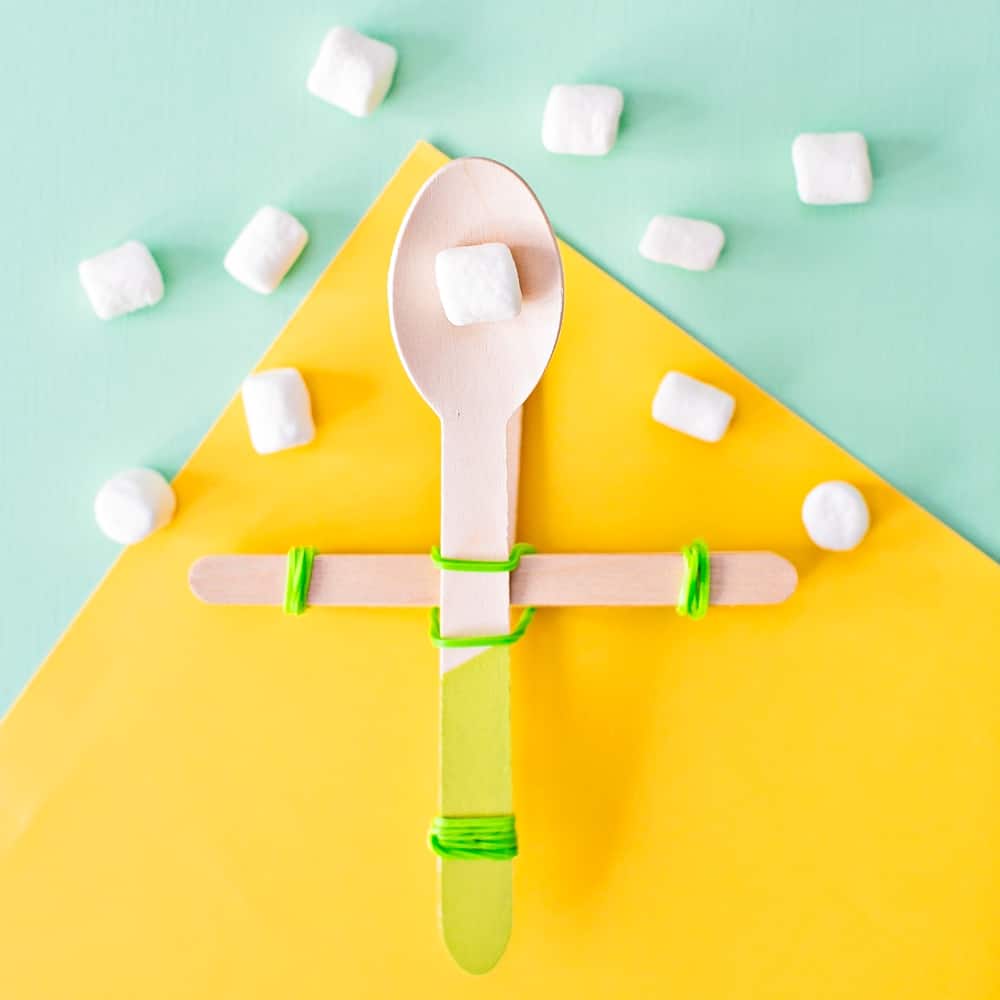