In this time focused on giving, it’s inspiring to take a look at some ways kids have taken the helm and championed to make a difference in causes they believe in. These 8 amazing kid-started charities are uplifting stories with hope for the future in the hands of these capable, kind and socially conscious young leaders. These are feel-good stories to share with your children and worthy causes to learn about. 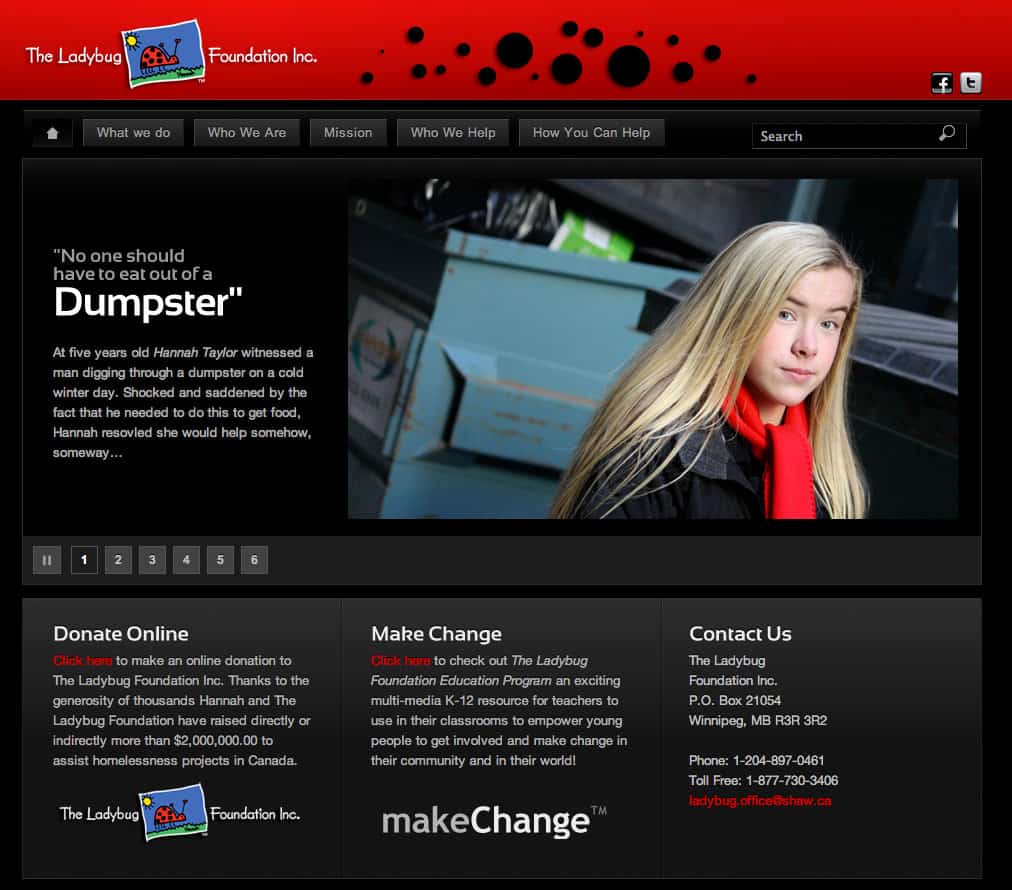 Ladybug Foundation At the age of 5, Hannah Taylor saw a man eating out of a garbage can and asked herself how homelessness could be saved. By age 8, she founded The Ladybug Foundation, becoming the young face of homelessness and their voice, speaking to groups as large as 16,000. To date, the foundation has raised over 2 million to provide shelter, food and safety for homeless people. 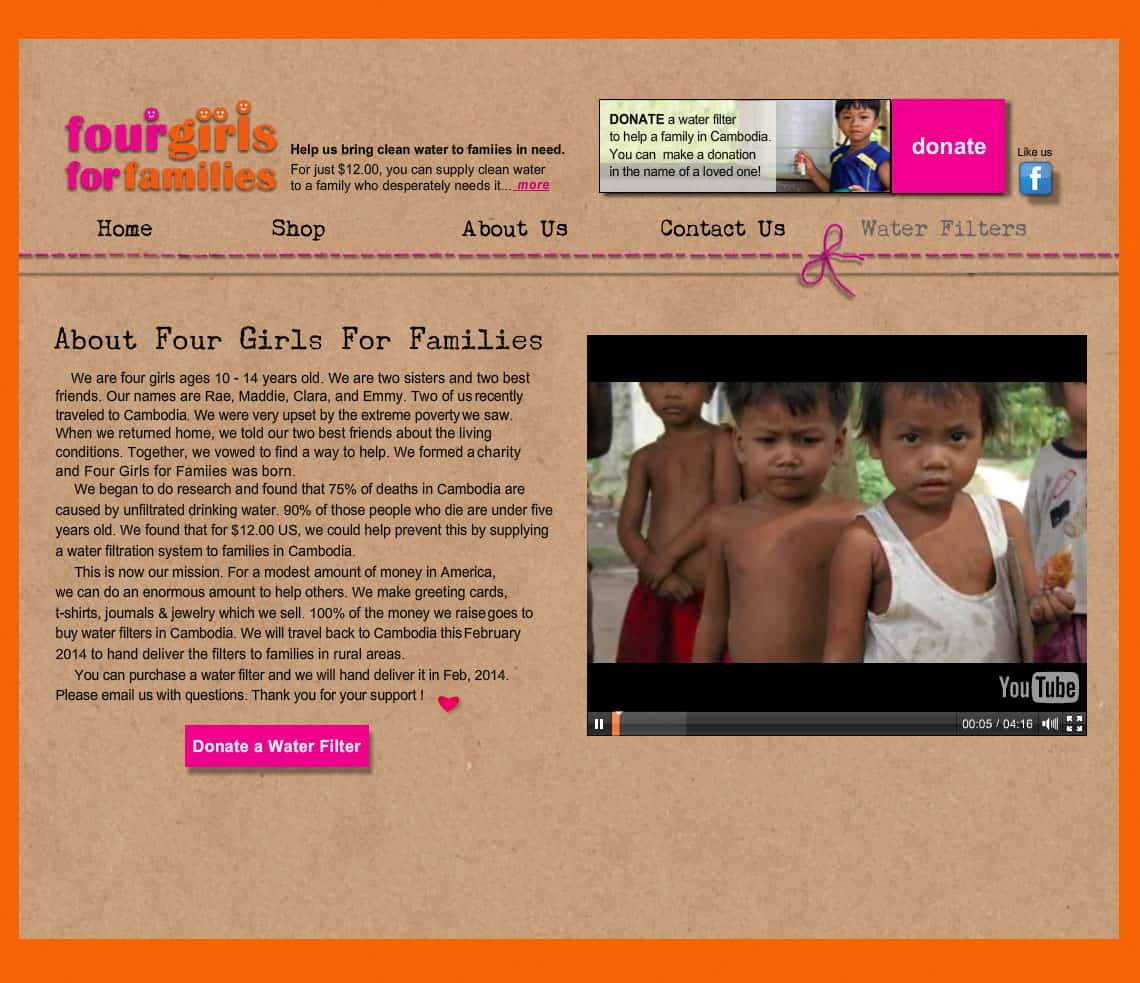 Four Girls For Families Founded by 4 girls, age 10-14, who saw the plight of lack of clean water in Cambodia firsthand and decided to do something about it. With a donation of $12, they realize they could provide a water filtration to help reduce the 75% rate of death in Cambodia due to lack of clean drinking water. In addition to donations, they make greeting cards, journals, jewelry and t-shirts of which 100% go towards buying water filters. 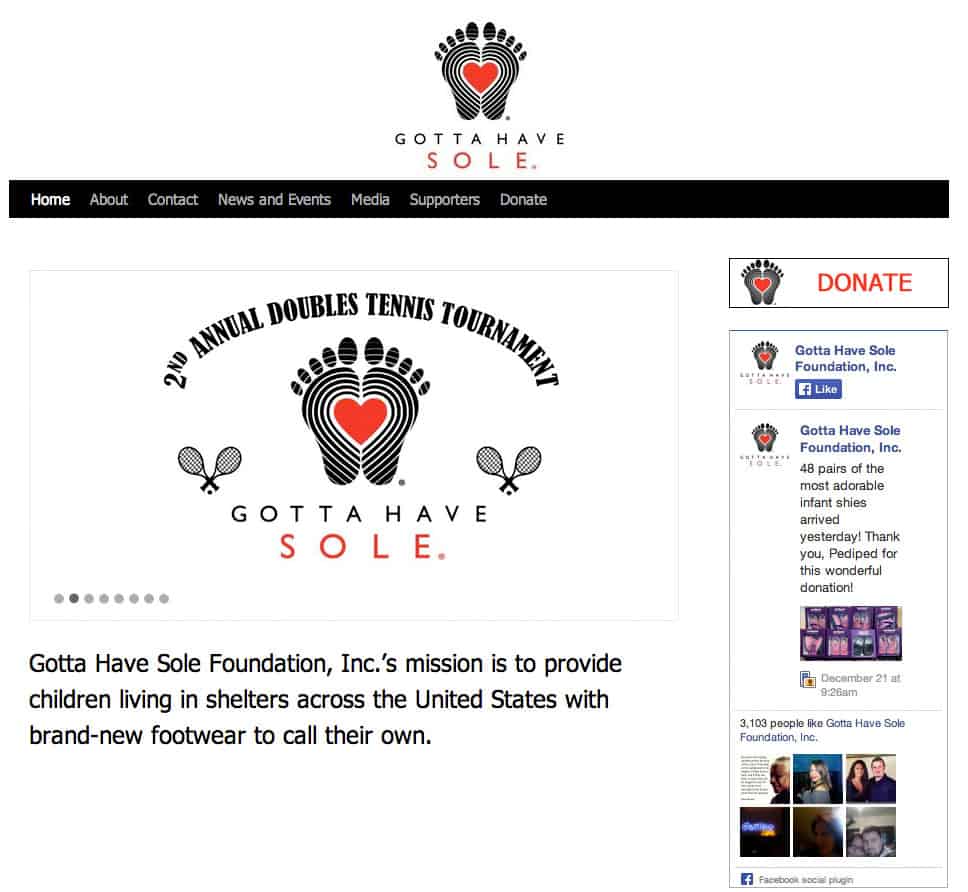 Gotta Have Soles Started by teen Nicholas Lowinger who was determined to help children in shelters have correct fitting pairs of shoes when he saw that most had to share with other family members or suffered from lack of proper fit. To date the foundation has provided new footwear to over 10,000 children in over 21 states in homeless shelters. 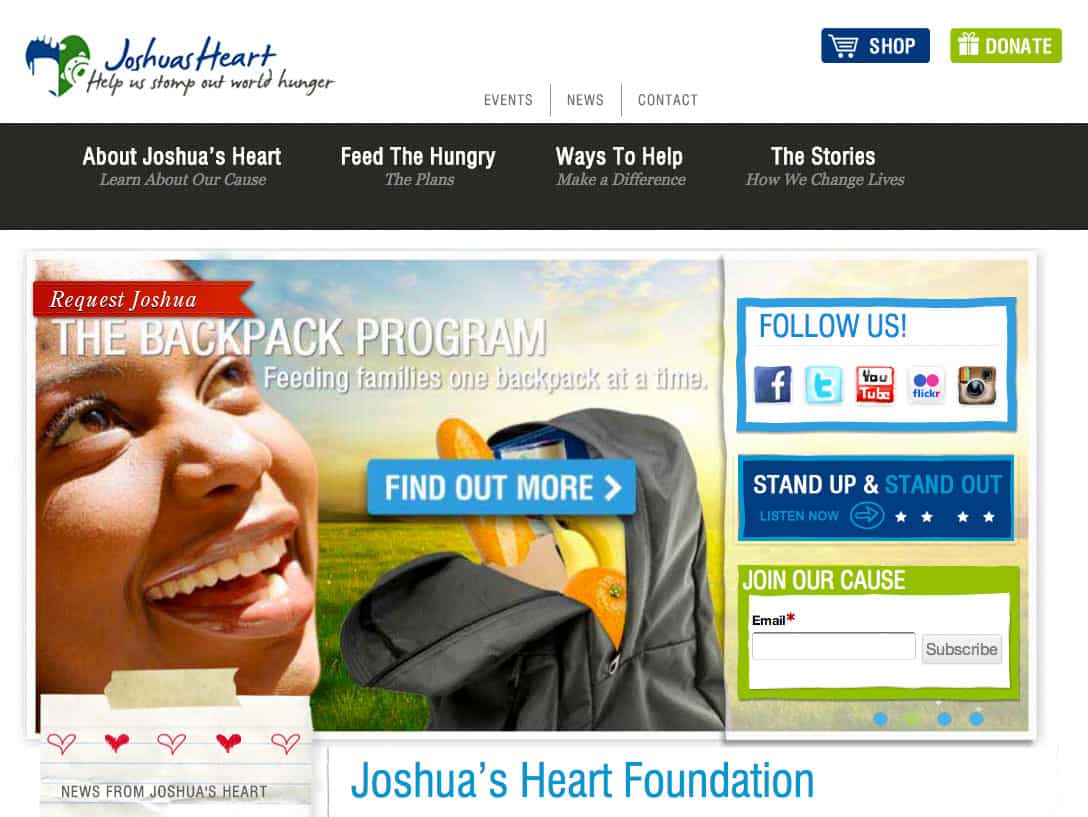 Joshua’s Heart Foundation Five year old Joshua William’s wish is to help those in need who struggle to put food on the table. This wish inspired him to found the Joshua’s Heart non-profit organization whose goal is to end hunger by providing basic needs and foods and to educate communities about ways to fight poverty and hunger. 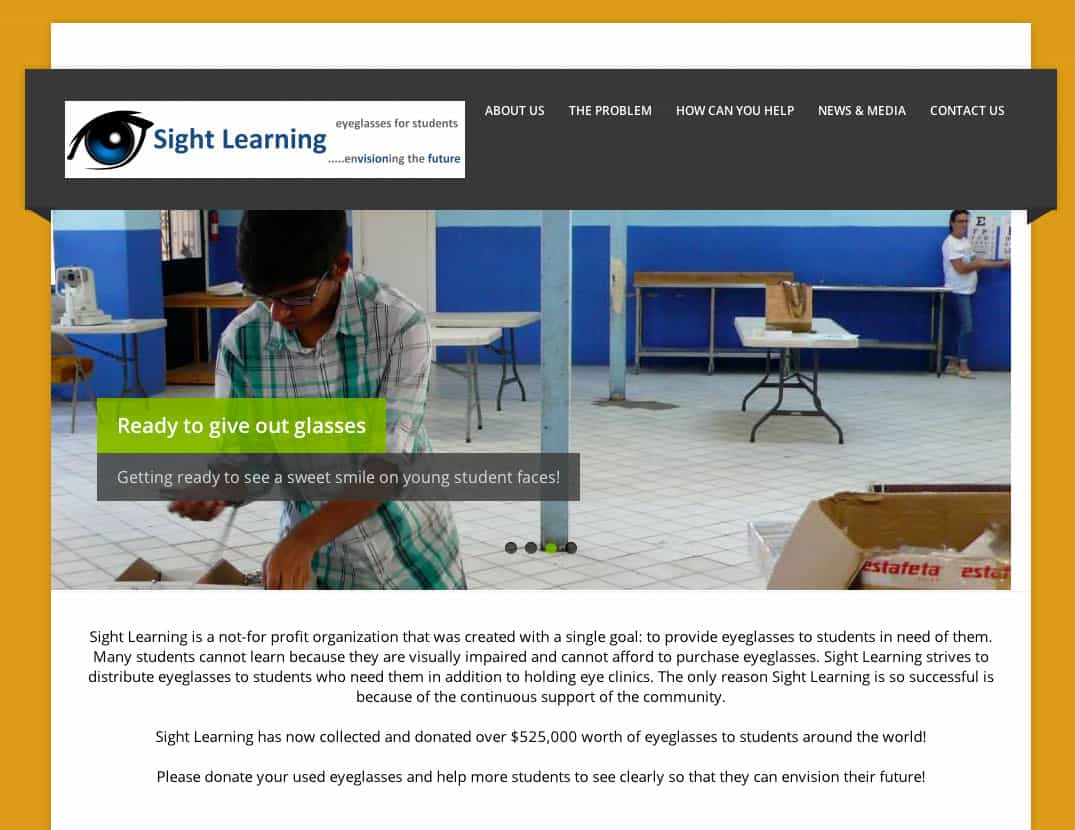 Sight Learning When teen Yash Gupta broke his glasses and had to attend school without them, it got him thinking of how hard it must be for other children who can’t afford eyeglasses and the impact on their education. This motivated him to start Sight Learning whose mission is to provide children the gift of eyeglasses across the world help them perform better at school. To date, the foundation has donated over $525,000 eyeglasses. 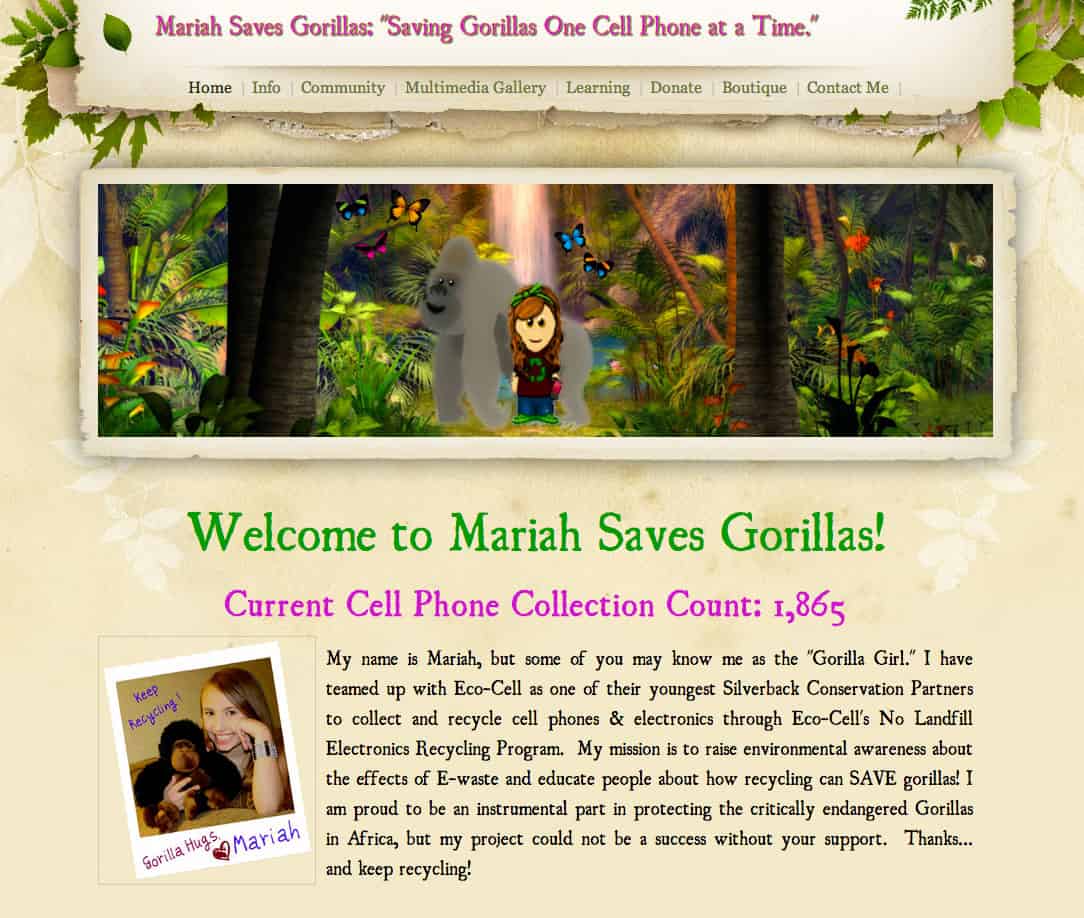 Mariah Saves Gorillas When Mariah was 6 she watched a documentary about mountain gorillas in danger of becoming extinct due to illegal Coltan mining (a material used to produce cell phones). Since then she has become an Eco Cell Conservation Partner and is on a mission to “save gorillas one cell phone at a time” through recycling cell phones. To date, she has collected 1,865 cell phones. 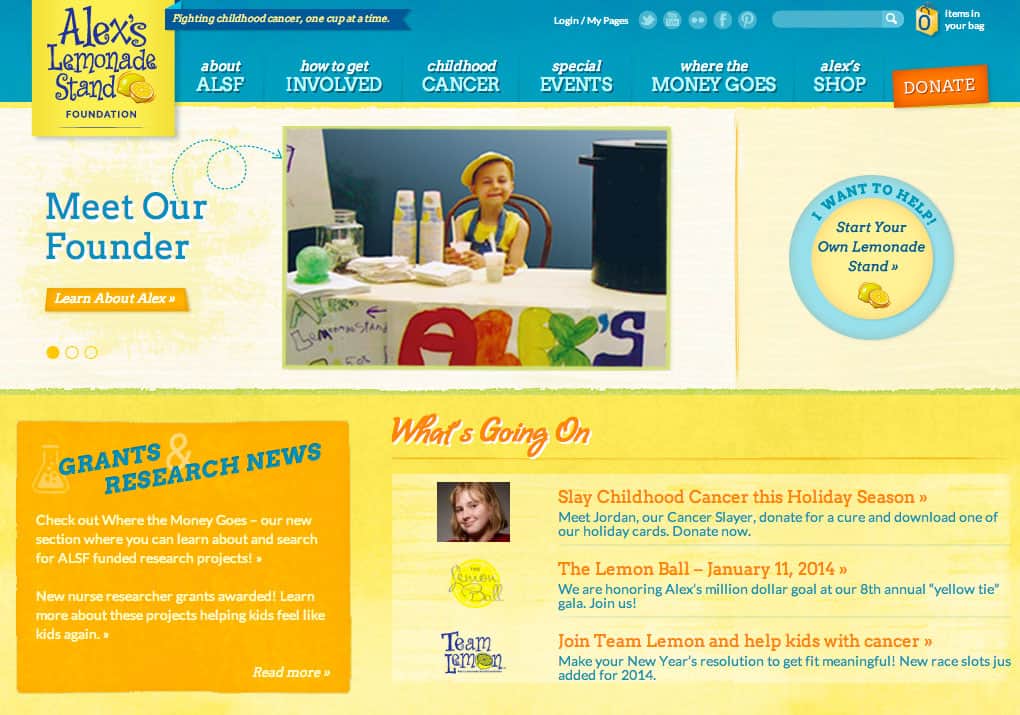 Alex’s Lemonade Stand Alexandra “Alex” Scott battled childhood cancer and at the age of 4, started a lemonade stand to “help doctors help kids just like her.” While continuing to battle cancer, the lemonade stands became a yearly tradition and soon other communities began to hold their own lemonade stands to donate to Alex and her cause. Sadly, Alex passed away at age 8, but her legacy continues through her foundation. 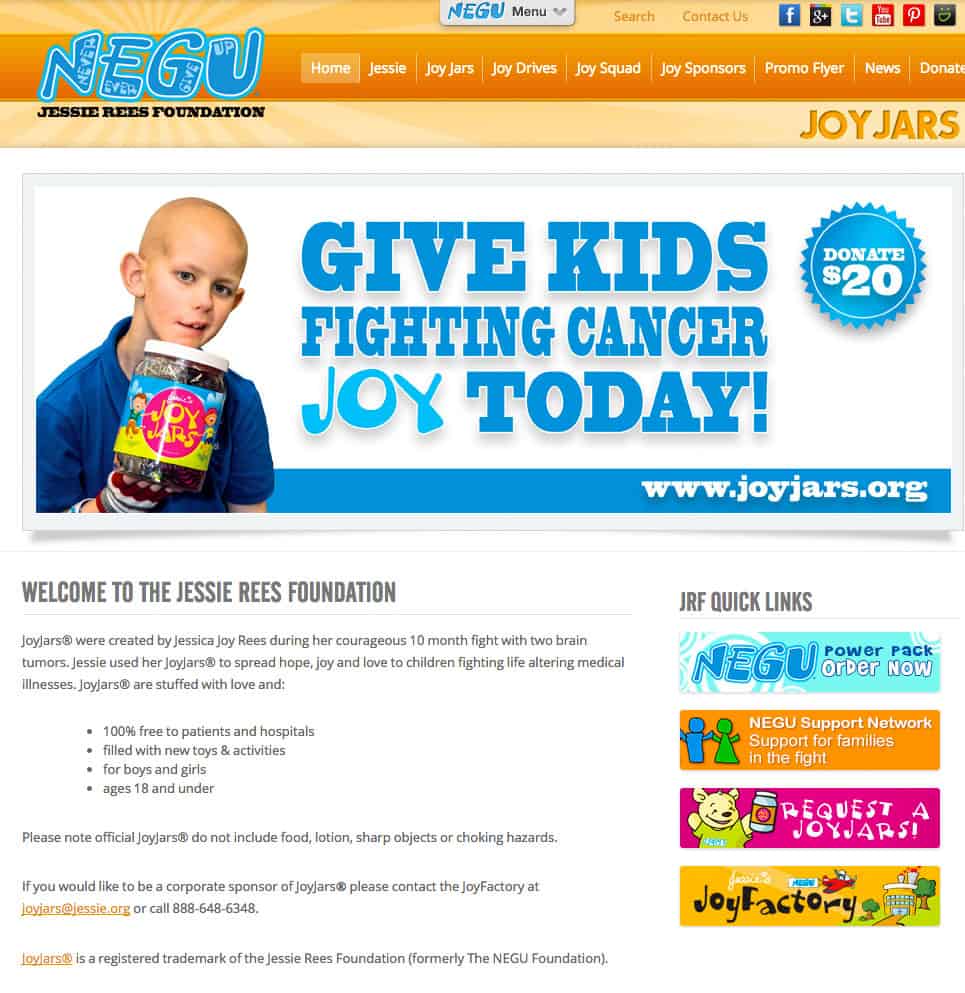 JoyJars Dedicated to giving kids fighting cancer a bit of joy, the idea for these jars was started by 12 year old Jessica Joy Rees during her 10 month battle with brain tumors. The jars are filled with toys and activities for kids fighting life altering illnesses with the goal to spread a bit of love, joy and hope.