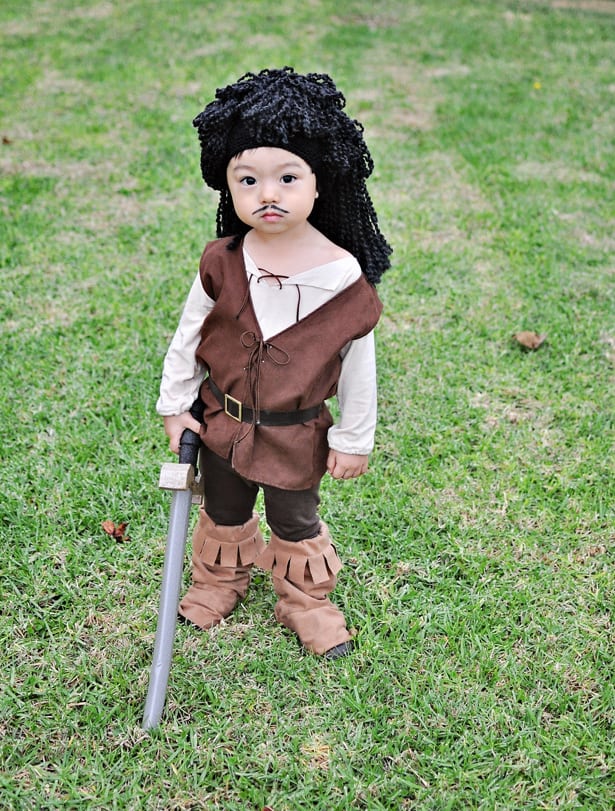 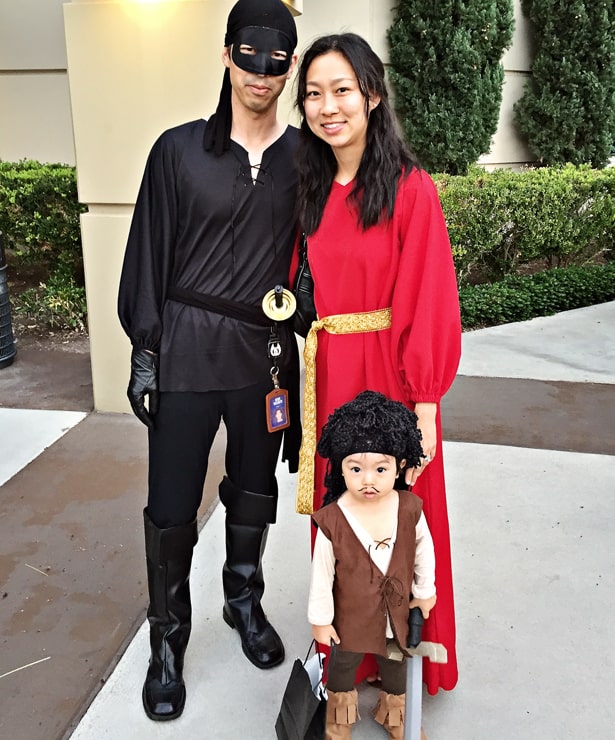 If you can quote this famous movie line by heart, “Hello. My name is Inigo Montoya. You killed my father. Prepare to die,” chances are you already recognize the costumes here.

This clever costume idea is shared by one of our readers and friend Rita. She dressed up her adorable family as characters from The Princess Bride – husband Derek as Dread Pirate Roberts, son Evan as Inigo and herself as Buttercup. Rita’s husband Derek came up with the idea as the Princess Bride is his all-time favorite movie, and they even had theme song play during their wedding! Thanks for sharing this fun costume with us Rita! Read more below on how this creative mama constructed the costumes with tons of DIY details. 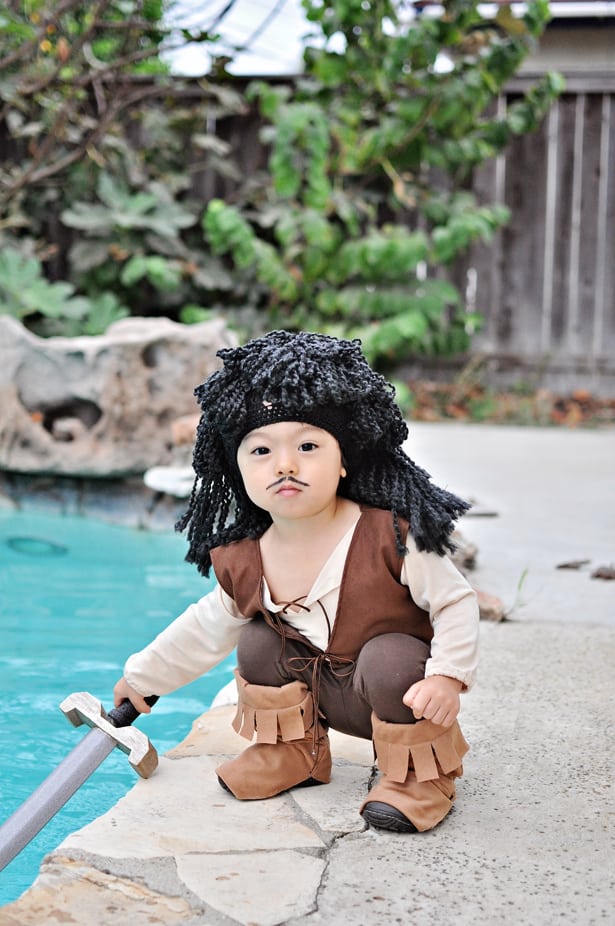 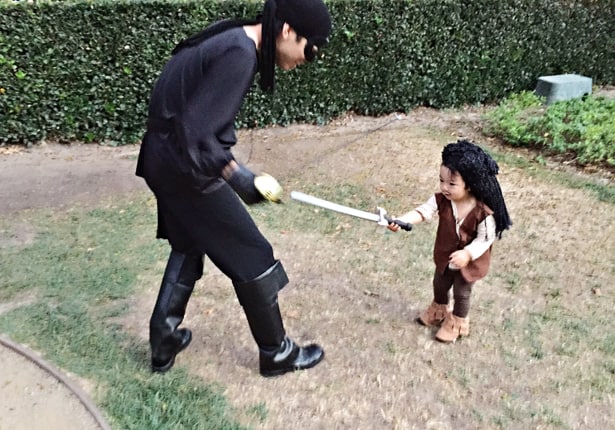 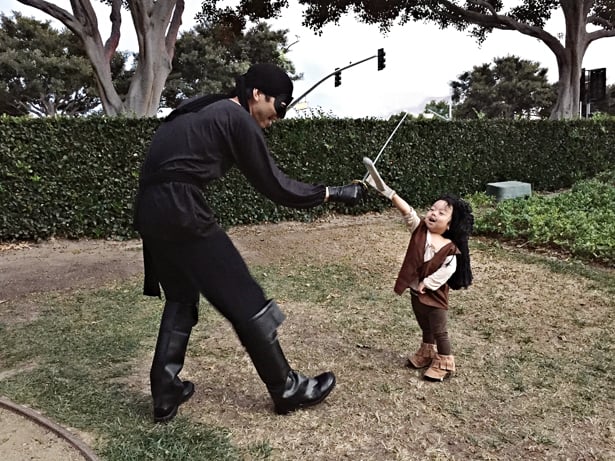 I wanted to make sure everything was comfortable enough for Evan, so I made sure to get soft fabrics. I also knew that I didn’t have much time to make everything, so I got fabrics that didn’t fray when cut so that I wouldn’t have to do as much finishing and hemming. I used this pirate shirt as inspiration.

The shirt was a white jersey fabric and I dyed it with some tea, because I couldn’t find the same fabric in the off-white/beige color I was looking for. I folded the fabric in half and traced around a long-sleeved shirt that fit him (making sure to align the top to the fold) and cut it out, leaving the fold in place. Then I cut out the hole for the head and made a slit down the middle. I erred on the smaller side, since I could always make it bigger after trying it on Evan. Then I sewed the sleeves and sides of shirt together, and put in elastic at the cuff of the sleeves and hemmed the bottom of the shirt. I used my small craft hole punch to punch out the holes for the brown cord to go through.

Next, I made his vest. I used a soft, washable microsuede fabric. I used a vest that Evan already had as a pattern. I traced out the back piece, the left side, and the right side. Then I lined the three parts and pieced them together with the wrong sides together, and sewed the shoulders and sides. I used the same hole punch as I used for the shirt to make the holes for the brown cording to go through.

The boot covers were made with a the same microsuede fabric as the vest, just a different color. I used this tutorial as inspiration and modified it to not have a cuff opening, and to add a fringe and an elastic on the bottom to hold the cover in place.

The belt was just a brown trim and I added a brass buckle. The wig was made from a crochet hat and I used thick, “curly-looking” yarn to try to get that wavy, mullet hairstyle. I wrapped the yarn around a pillow that would give me the right length of hair about 20 times. Then I tied the side without the loose ends (the start and finish ends) and cut the other side so I had a little bundle of yarn that was tied in the middle, and then used a crochet hook to pull the tying yarn through the hat and tied it to the hat. All the knots were inside the hat. For the front part of the hair, I made shorter loops and tied them without cutting them. I used this tutorial as a starting off point, and then just made it up as I went along to get it to look how I wanted it to look.

Fabric, buckle and crochet hat were sourced from JoAnn’s Crafts.

His sword had to be safe enough to carry and I was lucky enough to find this foam sword in the Dollar Spot at Target. It was the shape I was looking and I painted it with metallic gold nail polish to get the brassy look.

It was easy to find brown leggings, so I didn’t have to make those 🙂

The shirt was made in the same exact way as Inigo’s top except I made bigger sleeves so that they would be a little more billowy after I put in the elastic at the cuffs. It was made using a polyester fabric, which didn’t really fray after cutting, so I didn’t need to finish the neck or the bottom edge. I used the hole punch to make the holes for the black cording.

The head wrap and sash were just a long strip of black rayon jersey material. I didn’t measure it, I just sized it on his head and cut out a strip, and used the rest to tie around his waist.

The boot cover, mask, and sword were from Party City, and his gloves were from Target.

My dress was made the same way as the boys’ shirt – just a lot longer and with even wider sleeves. I traced around one of my maxi dresses to size it for length and width, and then used a long-sleeved shirt I had to figure out sleeve-length. I found a ribbon that resembled the gold belt Buttercup had on in the movie, and just tied it around my waist. The neck and bottom are also unfinished.

Thanks for sharing this amazing family costume Rita! Such a great job on all the details and your little Inigo is just too cute!

Do you do family costumes on Halloween? Please share in the comments! Check out more fun kid-friendly Halloween ideas! 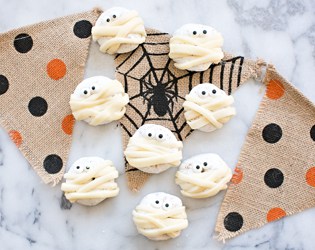 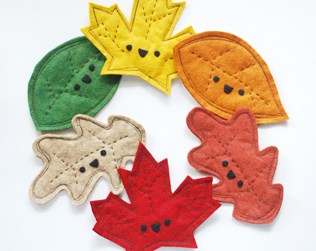